It is extremely common for students in a law school to vary greatly when it comes to discussions on assignments. Coincidentally I’ve been wanting to pen this particular blog post for some time and a recent assignment seemed to reinforce this point. There are many instances whereby a particular scenario may be presented to us as students or to lawyers in practice and the solutions that can come about or the analysis to the matter may differ. This is extremely common and it is indicative of the fact that people are just different. However, differences would have to converge to common ground when it comes to certain matters.

The study of law as a discipline is one of great endeavour and the reward at the end is an extremely analytical mind to solve issues not for oneself but for the people around him. For all the great things that humankind has created, our history is chequered with instances of oppression, discrimination and people in power consolidating power to the detriment of the less wealthy and powerful.

We have tried to solve this through doctrines which stated the rights and liberties of people. One of the earliest of such doctrines was the Magna Carta which promised the barons rights like protection from illegal imprisonment and access to swift justice. Even though it did not cover the rights of everyone in England, it did form an important genesis to society codifying our rights into treaties. Fast forward to today and we have the Universal Declaration of Human Rights.

If anyone in law school is unfamiliar with this document, I implore you to take a look at it at this link: https://www.un.org/en/about-us/universal-declaration-of-human-rights

While we should always consider alternate views, not everything is up for debate.

Whether a case is made out for a breach of directors’ duties under the Companies Act can be up for debate. Whether a woman has the right to education is not.

Whether a certain property is partnership property can be up for debate. Whether oppressive regimes firing on their own people is acceptable is not.

Whether a certain individual had the knowledge that he was aware of drugs in his borrowed motorcycle is up for debate. Whether someone is being persecuted for his right to practice his own religion is not.

Whether an offence was committed at a public place is up for debate. Whether marital rape is acceptable is not.

Whether a push or bump at a hawker centre was a form of trespass to the person is up for debate. Whether a man has a right to touch a woman without her consent is not.

Perhaps this is a poignant moment with what is happening in Afghanistan. Women who have represented the country’s national football team are deleting evidence of that representation on social media for fear of repercussions from the Taliban regime. Women fear for their rights because of the Taliban’s previous rule. In its earlier regime, girls and women were not allowed to attend schools. If this does not sound preposterous to a civil human being and if any individual could make a case for anything other than these actions being contrary to the basic values of civil society then I would think that individual needs serious self-reflection.

We may differ in views on legal issues. However, as a collective group, our values have to be aligned.

Back to my assignments!

With a little inspiration from Master Yoda… 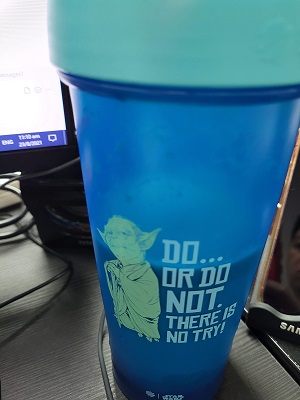 About the Author: Daryl Lum