I live near Sungei Api Api. And I have often seen roosters and chickens roaming freely.  I have never paid them much attention until I had to study the Wildlife Act.

Of late, there has also been much media attention on otters, monitor lizards, pythons, owls and wild boars, in our midst, boldly coming into our communal spaces. Let’s face it, these animals are cute from far but far from cute if they turn aggressive.

Enter the Wildlife Act (Cap 351, 2000 Rev Ed). It was enacted to protect these animals and ensure public safety whilst preserving our delicate ecosystem. Feeding, releasing or keeping them are actually compoundable offences.

I never even knew such an Act existed. Now, thanks to law school, I have the privilege of delving into the enactment of the Act.  How and why it came to be.

I gained new appreciation of the legislative process: the rigour, public consultation and debate that happens before a Bill can be passed. I learnt to access Hansard, the repository of Parliamentary reports. And it provided the needed context for purposive statutory interpretation.

The Wildlife Act is a very well-drafted piece of legislation – it is clear and comprehensive, addressing every possible mischief relating to human-wildlife interactions. Yet, it presents a wicked conundrum that is haunting me.

Meet the Red Junglefowl. It is the ancestor of the domestic chicken (yes, for chicken rice) and popular for cock-fighting in Thailand. It is also a threatened species. 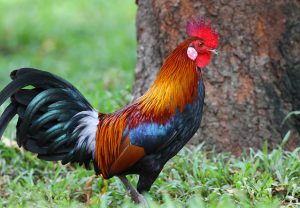 Section 2 of the Wildlife Act defines wildlife species as ‘any species of animals of a wild nature, but excludes domestic dogs and cats, horses, cattle, sheep, goats, domestic pigs and poultry’. Given the intent of the Act for the protection and preservation of wildlife, is the Red Junglefowl wildlife? Or is it domestic since it is the ancestor of the domestic chicken? 😛

About the Author: Wendy Ong