An apology without change is just manipulation 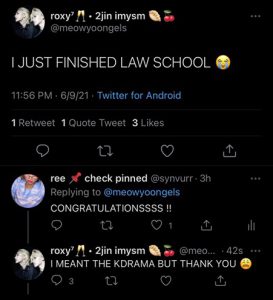 Saw this on Twitter awhile back, gave me a good chuckle! Semester 1 down, many more to go!

Watching “Law School” while actually in law school was interesting. Being a drama series, its natural for scenes and scenarios to be exaggerated.

Later episodes of the drama brought up a sensitive but important issue – sexual abuse.  The case (in the drama) involved an abusive boyfriend and his girlfriend. She initiated a break-up, the boyfriend refused and threatened to distribute a video recording of both engaging in sexual acts. The ensuing struggle resulted in the boyfriend hitting his head on a kerb, resulting in serious head injuries.

Now I shall not go into TMA-mode and discuss what offences and possible sentencing this case would result in. Instead, let me share this quote:

“An apology without change is just manipulation”

In the drama, the boyfriend repeatedly apologized for his violent behaviour and promised to stop. The girlfriend foolishly believed. She later realized her relationship did not bring her real happiness, it was built on superficial moments of joy.

This statement can apply to us in many ways. COVID-19 has forced us to spend much more time at home and encouraged us to be more intentional in connecting to selected friends.

During this period of celebrating Parents’ Day, I encourage all who read this blog post, and my fellow and future law school students, to take this precious holiday period to not only start prepping for Semester 2, but also to be reflective and intentional in showing care and concern to those around us.

About the Author: Aaron Kwok

Yes, I share the same name as the famous Hong Kong singer. I cannot dance to save my life, but have honed my singing skills in the shower to an acceptable level. Currently in the construction consultancy field, on my quest to obtain my SUSS Law degree and eventually, the Singapore Bar.